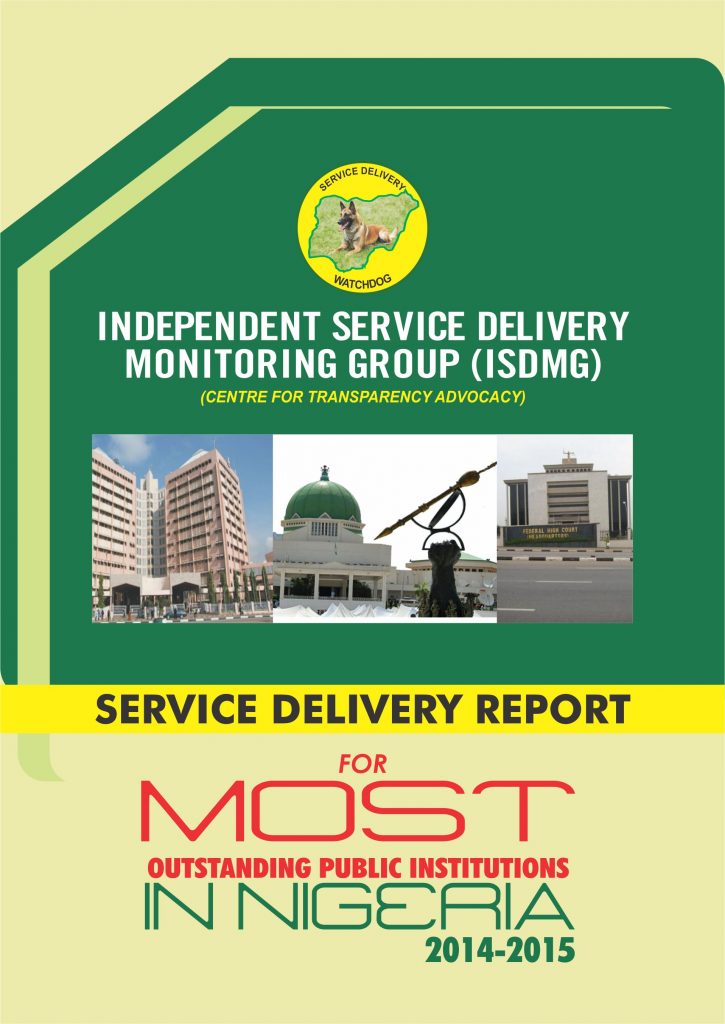 BACKGROUND
The year (2014-2015) under review is a challenging one in many respects for Ministries Departments and Agencies (MDAs). The “politics of transition” from the public service reform objectives of “continuity” of the erstwhile ruling party created its own problems- the politicization of public service, appointment and selection process-of transparency, accountability, openness and service within the policy agenda of transformation and eroded some of the attributes of neutrality many attach to the public service. During the months leading to the 2015 General Elections, the politicization of MDAs reached its climax; with caution thrown to the wind and neutrality heavily compromised under the heavy cloud of politics that enveloped the governance environment, public confidence in the governmental process waned. In many instances, partisan public institutions were openly challenged by partisan and non-partisan interests for not staying true to their apolitical character and statutory mandates.

Many MDAs stayed true to their mandates, principal managers of the MDAs were prominent in the campaigns of the erstwhile ruling party; but there were many others that secretly campaigned for both the ruling and opposition parties, thereby compromising these public institutions. The stark truth is that many MDAs were caught up by the undercurrent of party political patronage and their scope of services invariably altered by politics. The outcome is the poor and ill-defined approach to delivering on statutory mandates that marked the year under review, particularly in the last quarter of 2014 and the first quarter of 2015, creating service hiatus that has defined the outcomes during the second, third and the fourth quarter of 2015.

A BAD OR A GOOD YEAR?
The year under review is in many respects a bad year for public institutions. The point here is that power featured prominently in the way the country was managed, public service acquired little importance in the way public service reform framed it- in the area of selection and appointment, discipline, promotion, etc-service was visibly absent in the arrangement that emerges from the power play. Take the Nigeria Ports Authority, for instance, that witnessed the misfortune of having its chairmen changed as the power pendulum swung between the erstwhile ruling and opposition parties. The sad aspect of the power pendulum swing is that no sensible examination was made on the effect of politics on the Authority as a strategic revenue generating institution. All is still not well with many MDAs as we approach the end of the last quarter of 2015. Politicization isn’t the only problem many MDAs encountered during the year under review. Another problem, and a more fundamental problem, is the absence of legal frameworks. The execution of the statutory mandates of many MDAs, hindered by the absence of law and regulations, creates uncertainty and narrows, and completely eliminates, the prospect of funding. In a constitutional democracy where public expenditures are appropriated by law through an Act of the legislature, seeking funding for public institutions becomes problematic. This is the fate that befell many MDAs during the year under review. Until a proper regulatory framework that recognizes the place of the law, this problem will persist and well into 2016.

The more serious problem uncovered during the research into and compilationof this report is the way public servants neutralize framework that prohibits behaviors that are not in tandem with the public service code of conduct and rules and convert the public service into their private estates. It is this privatization of public service that many term corruption in the public service. The misuse of entrusted power for private gains most prevalent in the public sector can be discerned in the public conducts of public officials who transact government, or public sector or public institutions’ businesses on the basis of discretion and unethical rules that are in most cases only beneficial to them and their proxies. Failure to identify poor and wrong behavior, poor administrative ethos and choices so often exercised irrationally is the greatest challenge to these public institutions. There are examples of public institutions though not featured in this report, that serve as bad apples, poor examples of the case we make here. Unable to deliver on their mandates, directors and managers of these public institutions, as widely reported in the media, consistently award salaries, allowances and pensions increments, almost in the region of over one hundred percent, to themselves. The year under review wasn’t all doom and gloom. The public institutions featured in this report have fared well, considering the challenges observed in their institutional remits, powers, structures, resource constraints, leadership and management.