Gentlemen of the Press,

We find it necessary to address you this morning as partners in the struggle for the rights of the Original Inhabitants of the FCT.

As we are all aware, God grace, tomorrow the members of both chambers of the National Assembly will be voting for amendment of some clauses and sections of the 1999 Constitution.

Of great interest to us are two areas of the amendment which directly affects the Original Inhabitants of the FCT:-

1. Section 297 to 307 to be replaced by Establishment of a Mayoralty for FCT with an elected Mayor and Mayoral Assembly which will now replace the President by designating FCT Minister as the Governor of FCT and National Assembly as the FCT Legislators respectively as against the status of executive and legislative functions respectively vested on the President and the National Assembly.

2. Section 147(1) that deals with appointment into Federal Executive Council (i.e., Ministers) The clause that provides for appointment of “Ministers at least one each from the 36 states of the Federation” is to be amended to add “and the FCT”. By this, the people of FCT will have a representation in the Federal Executive Council. Let me, however, make it very clear here or rather disabuse the minds of some people that, we are not asking for an original inhabitant of FCT to be appointed the Minister of FCT, no, but a member of the Federal Executive Council who can also be posted to any Ministry to serve. If the Mayoral Council is established, the office of the FCT Minister will automatically seize to exist.

In the light of the foregoing, we wish to use this platform to appeal to all the Distinguish Senators, Honourable Members of the Federal and State Assemblies to uphold the citizenship of original inhabitants of FCT being Nigerians like every citizen of Nigeria by voting (YES) for the amendment of these sections of the Constitution to give the original inhabitants of FCT a sense of belonging as the first citizens of Nigeria that have sacrificed  their identity, homes, economy, social and political status by giving up their land and providing a peaceful atmosphere for the unity of this country. History will surely not forget the 9th Assembly for upholding their oath of office to uphold the Constitution and do good to all manner of people including justice for the original inhabitants of FCT.

We sincerely thank the Media especially all of you that took time out to be present here this morning for always supporting and giving voice to the struggles of the original inhabitants of the FCT to regain their rights as citizens of Nigeria.

Equally, we use this medium to commend Mr. President and Commander-in-Chief of the Federal Republic of Nigeria, Muhammadu Buhari for signing into law the electoral Bill of 2022. Parts of the contents of the bill (especially, the deployment of technology) were put to test in Anambra state and the just concluded FCT Area Councils elections and found to be effective in arresting some electoral malpractices, delays and other inadequacies usually experienced in the past. The two electrons are adjudged free, fair, and credible in recent time. This is a hope recandled for good governance and a sustainable democracy in Nigeria.

Words will not be adequate to express our gratitude to the transparent service delivery watch (Bull) dog, the Centre for Transparency Advocacy (CTA) for standing tall and unshakable in ensuring transparency in service delivery to the grassroots and especially your effort to ensure the original inhabitants of FCT get and enjoy their rights of citizens of Nigeria. To MacArthur Foundation through the Resource Centre for Human Rights & Civic Education (CHRICED), always scoring goals in your humanitarian services, we say, Thank you.

Wish you all a safe return to your various destinations. 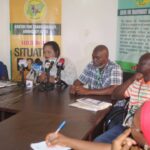 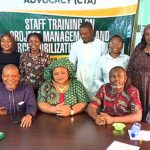 No comments to show.

No products in the cart.

Sign up to receive latest news, updates, promotions, and special offers delivered directly to your inbox.
No, thanks